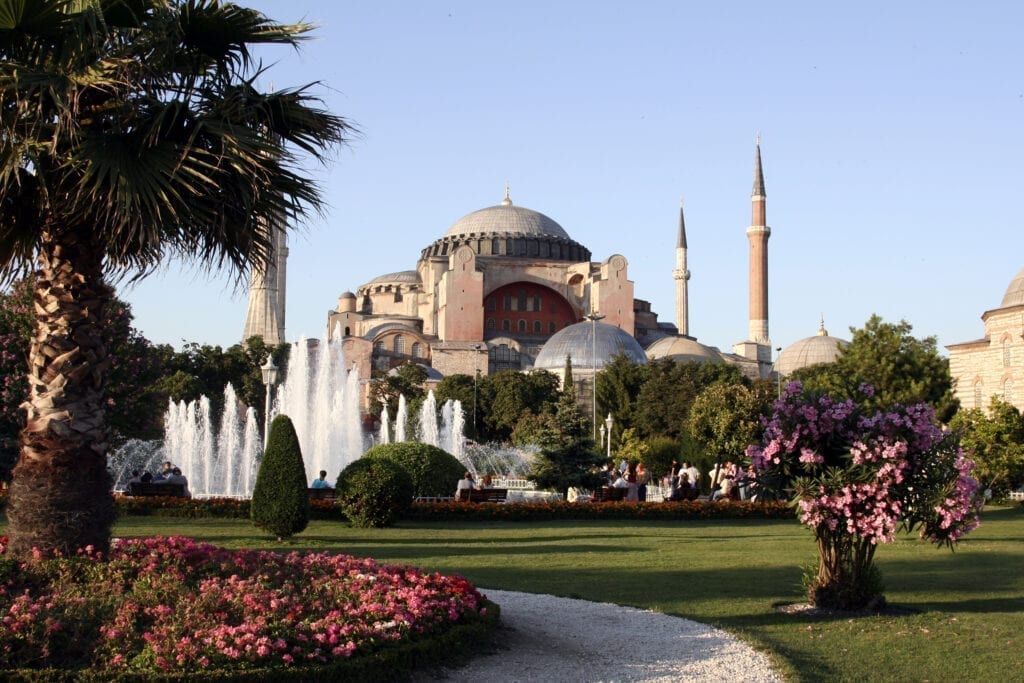 Sunday, JULY 4
Depart home cities in the USA for overnight flights to Athens, Greece (ATH), arriving Monday, July 5. Rest and relax at Athens’ Grande Bretagne Hotel.
TUESDAY, JULY 6
CORINTH
Following an included breakfast at our hotel, we’ll travel overland to Ancient Corinth. The Apostle Paul used this city as his missionary base in Greece. Teaming up with Aquila and Priscilla, he spent about eighteen months of his second missionary journey planting a church here. Unearthed in the Corinthian excavation is the actual “bema” (judgment seat) where Paul was brought to trial and acquitted by the Roman proconsul, Gallio. (Acts 18)

We'll make a short photo stop at the Corinth Canal, an engineering marvel consisting of a single channel at sea level, thus requiring no locks. Cutting through the narrow Isthmus of Corinth, the canal connects the Saronic Gulf with the Aegean Sea. An attempt was made to dig the canal in the first century when Nero threw the first pickaxe and excavated a bucket of earth. But the project was never completed until eighteen centuries later in 1893. Lunch at a countryside taverna is included. Be sure to enjoy a late afternoon swim in the rooftop pool of our hotel with views of the Acropolis before heading out to dinner at a restaurant of your choice.

THURSDAY, JULY 15
ISTANBUL
After a short flight from Thessaloniki to Istanbul, we will partake of an included lunch in the Old City before we begin our exploration of the ancient world where the historic treasures of the Roman, Byzantine, and Ottoman Empires await. Today you visit the Hippodrome, the ancient sports arena dating from the second century – five times the size of an American football field. Remove your shoes as we enter the famous Blue Mosque. To end our day of exploring this pivotal ancient city, we will visit the Chora Church with the world finest surviving Byzantine Christian mosaics and frescoes. After arriving at the five-star Intercontinental Hotel, we will enjoy an included dinner together.

FRIDAY, JULY 16
ISTANBUL
Following breakfast at our hotel, many impressive sites await your visit, including the dramatic, multi-domed Hagia Sophia. Your tour will include a visit the the breathtaking Underground Cistern built in 532. In the cool, subterranean air, take a stroll in the forest of hundreds of marble columns arranged in symmetrical precision. After lunch, haggle in the famous Covered Bazaar, a medieval labyrinth of 3,000 tiny shops, and tour the world-famous Topkapi Palace, home to Ottoman rulers for over four hundred years. Dinner and overnight in our hotel.

SATURDAY, JULY 17
CAPPADOCIA
After an early breakfast at our hotel in Istanbul, you will take a short flight to Kayseri near Cappadocia. Among the breathtaking sites of the ancient biblical city of Cappadocia, the Goreme Open Air Museum resembles a vast monastic complex composed of scores of refectory monasteries placed side-by-side, each with its own fantastic church. Here you will examine frescos from the 10th century that still retain their colors. Overnight at the boutique Argos Hotel.

SUNDAY, JULY 18
CAPPADOCIA/ISTANBUL
Float over Cappadocia’s valleys and rock-cut churches and experience the sunrise from a unique aerial viewpoint from an optional (and unforgettable) hot air balloon ride. Celebrate your safe landing with a champagne toast before returning to the Argos Hotel.
After breakfast at our hotel, we will visit one of the dozens of underground cities of Cappadocia that housed communities replete with living quarters, chapels, storage areas, a communal kitchen, and burial chambers. Next you will visit the intriguing town of Uchisar and its natural fortress, which was used both for housing and defense. You will also visit the iconic fairy chimneys at Pasabag and the small town of Avanos known for its local pottery made with clay from the Kizilirmak River. Enjoy a traditional lunch in a cozy family village home.
Depart Cappadocia in the late afternoon for a flight back to Istanbul. We will return to the Intercontinental Hotel for a final night in Turkey.

Return to the USA on July 19 or extend your European adventure!

Detailed Inclusions for the Corinth Prelude

Detailed Inclusions for the Turkey Extension

Accommodations at hotels are standard rooms, but upgrades are available by contacting First Century Voyages. The cost for the Turkey Extension is $2,798/person with a minimum of 20 persons (10 couples). Additional hotel nights are available for those wishing to arrive early to recover from jet lag.